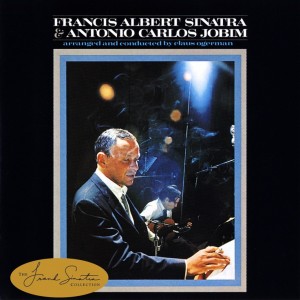 Ok, so I’m rocketing through these albums but it’s still odd to see just how quickly the trends must have been changing in the sixties. By the summer of ’67 the scene was all about psychedelia and garage rock, when just a few months earlier bossa nova had taken over the planet. It’s like watching a Mad Men marathon.

For our Frankie, by 1967 his career had calmed down a bit. From the fifties up until just a couple of years earlier he’d been on top of the world with his career at Capitol Records, but now fashions had changed and he was starting to become a relic.

Of course, that sort of thing never bothered our Frank, and though the world was now convalescing from its Latin fever, he saw a chance to bring Antonio Carlos Jobim’s songs to wider audiences with this little gem.

It’s a gentle, soft-spoken album, and though Jobim’s soothing guitar carries each track, and while it remains a meeting of two unique talents, it’s Sinatra that blooms here. Softly spoken and understated, he reaches back to the romantic melancholy of “In the Wee Small Hours” but in a new way.

This is a mood piece mostly, and with the possible exception of the lovely “Dindi”, not many tracks leap out. Still, as evidence that Sinatra was still both capable and relevant, it’s a significant and quite lovely piece of music history.