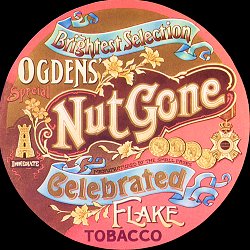 I love being British sometimes. I’m not really the flag-waving type, but after listening to a lot of west coast surrealism in the past few weeks, it’s really nice to come home to a totally different breed when it comes to psychedelic rock.

Which is why this album is so refreshing I guess. Now I’ve been told many many times over the years “Oh you have to listen to Ogden’s Nut Gone Flake” and how it’s “one of the greatest albums ever” but never actually got around to making up my own mind. The Small Faces for me were always “Itchycoo Park” and “Lazy Sunday” and I’d never explored beyond that.

This is an album that’s worthy of a damn good listen mind. Side A has corkers like “Lazy Sunday”, with its brilliantly cheeky cockney theatrics (“Gor Blimey Missus Jones, how’s your Bert’s lumbago” etc) and mumbly rocker “Afterglow”, plus the downright filthy “Rene”. But it’s Side B where things really get interesting, as it dives into concept album territory.

It tells the tale of Happiness Stan, who goes seeking the ‘missing’ half of the moon and befriends a starving fly who takes him to the cave of Mad John the hermit, who explains that the whole moon has reappeared and tells him the meaning of life. It’s narrated by Stanley Unwin in his trademark ‘Unwinese’ nonsense language and, with energetic and hopeful tunes like “Rollin’ Over” and closer “Happydaystoytown” is a delight to listen to.

For The Small Faces, the energies of psychedelia and surrealism are employed in a joyous and impishly playful way. “Lazy Sunday” is hard to conceive of being created by the West coast crowd of the US, and it’s all the richer for flying the British flag of batshit. It’s all over quickly, but once you get into it, there’s more than a few fun rides along the way.

Sadly it was to be The Small Faces’ last album, but as goodbyes go, this is one that you’ll find yourself smiling at.