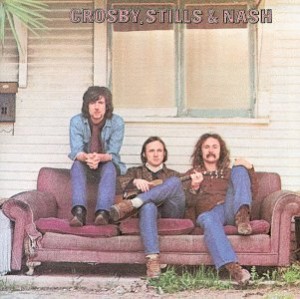 Crosby, Stills and Nash, arguably the first ‘supergroup’, made up of the best bits of The Byrds, Buffalo Springfield and The Hollies respectively, made a big impact on the hippie scene when they landed with this big debut. It’s full of gorgeous production, lots of eastern influences and some wonderful moments of harmony, but where’s the oomph?

Actually, maybe that’s not entirely fair; maybe I’ve been jaded by too many Byrds albums. This is, after all a folk rock record, and while it’s hokey and dated in places, it does its job. “Suite: Judy Blue Eyes”, which starts things off, is bold for its genre, and probably the highlight of the album. “Marrakesh Express”, which follows, is upbeat, but it’s one of a number of points on the album where you’re left thinking “enough with the druggy references boys, you sound like sixth formers”.  “Guinevere”, Crosby’s love song to Joni Mitchell, is quite warm and soothing.

It takes a while for the album to pique your interest after that, with “You don’t have to cry” and “Pre-road downs” ambling on without drawing much attention, while “Wooden Ships” is a gentle track helped along with some nice bass guitar.

“Lady of the Island” is surprisingly emotive and sensual, and was another love song to Joni Mitchell, this time from Graham Nash (Tsk. The sixties eh?). The harmonies work brilliantly on this one, and it’s a delight to listen to (so long as you remember not to think of David Crosby too much when you hear “our bodies were a perfect fit in the afterglow”).

In Robert Christgau’s review of the album, he highlights David Crosby’s vocals on “Long Time Gone” as saving the album from “a special castrati” award, and it’s the point where things stop being super-slick and produced and start getting some soul. It’s a great protest song and a great rock song, and the highlight of the album. Galliano’s acid-jazz cover missed the point.

My first draft of this review asked “Weren’t the sixties supposed to be revolutionary?”, but after a few listens that’s a bit mean-spirited. It’s not a psychedelic thriller, true, and it’s kind of middle-of-the-road, but it’s smooth and slick, and it yields a bit after a while.