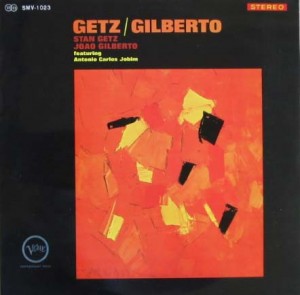 When Stan Getz unleashed “Jazz Samba” with Charlie Byrd just a year before, he kicked off a revival of love for Latin American jazz. “Desifinado” was a big hit, leaning on Brazilian bossa nova to create a great new sound that quickly became the soundtrack to the early 1960’s dinner party and dancefloor. So a follow-up was inevitable, and this one was a big one.

You’ll know “The Girl from Ipanema” of course. It’s been covered, soundtracked and sampled into the modern psyche repeatedly over the years, so much so that hearing it here, imagining you’re hearing it for the first time makes you realise what a little gem it is. The mix of Portugese and English vocals makes it all the better, and according to legend, that second verse was insisted on by the producer, and when the singer João Gilberto couldn’t sing in English, they roped in his wife Astrud to take on the second verse. Good thing, because it’s those soft wistful vocals that transport you away as you listen. She sung again on “Corcovado”, with a soulful drift that reaches back to Etta James and forward to the likes of Amy Winehouse.

Each track on here is a delight, authentically Latin and paced with gentle but simmering passion. The off-key rendering of “Desifinado” is soft and welcoming, and while this is an album of overall mood rather than big standout tracks, “Doralice” is pleasant and “Corcovado” ever more charming with every listen.

My jazz hymen’s been properly perforated hasn’t it?