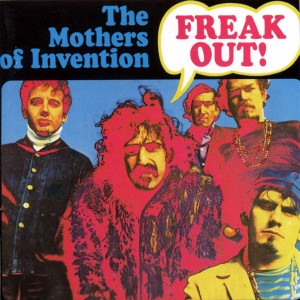 I was afraid of this.

OK, I may have been a bit sniffy about jazz albums a while back, but I mellowed eventually, and it’s worth pointing out that those Miles Davis albums have had a few replays since I posted about them on here. Still, I’ve always known that my big obstacles were going to be the ilk of Frank Zappa and Captain Beefheart.

I’ve tried. I swear it. I bought “Trout Mask Replica” (on the back of multiple Robert Rankin references), and went into it trying my best to like it, but it just felt so caustic, so uncomfortably dissonant, that I just couldn’t get through to the end without giving up and playing Dire Straits for a bit.

Still, like the jazz albums, I’m willing to come at it all with an open mind, and listening to this, at least it lets you in slowly. Opener “Hungry Freaks, Daddy!” is forceful, even abrasive, sure, but it’s evocative and welcoming too. For the first few tracks, to be honest, this is just a vaguely experimental blues rock album. It’s only when it gets to the likes of “Who are the Brain Police?” that it starts winding its way down the rabbit hole, and by the time it gets past silly doo-wop treats like “Go cry on somebody else’s shoulder” to the second half, it’s hard work. By the time you get to the penultimate a cappella track “It Can’t Happen Here”, you’re thinking “fuck this”.

As for the last track, the totally insane “The Return of the Son of the Monster Magnet”, well I had a Facebook rant about that one when I was listening to it for the first time, and friends’ opinions ranged from “silly fun” to “unlistenable crap”. At the time, I was certainly in the second camp, but while it won’t be making it onto any of iTunes playlists any time soon, it’s not quite so abysmal upon a second listen, even if you’re always consciously aware that you’re not quite mashed out of your head enough to appreciate it.

Alright then, I’ll admit that this is a lovingly constructed album, and that for a lot of tracks, I’d have been a lot more lenient if it had been Syd Barrett barking into the mic instead (Coming soon: A great big sycophantic review of “Piper at the Gates of Dawn”). It is flawed (“Any way the wind blows” is dreary), but it is bold, and it’s not a BAD album, even if it’s not my cup of Tetley.

Maybe I’ll get through “Trout Mask Replica” after all…