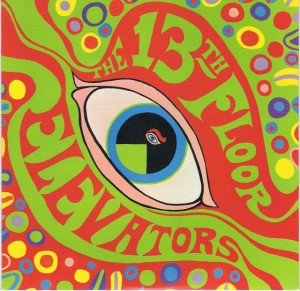 Things were changing by 1966. It was only a matter of months before that rock music was Carl Perkins covers, skiffle and doo-wop, and now it’s stuff like this album – 36 minutes of psychedelia and howling blues that was nothing like what had ever gone before.

The 13th Floor Elevators oozed drugs. The cover of this album and the sleeve notes shouted about the virtues of LSD and like, and the tracks within are insane, screaming garage rock. The opening track, “You’re Gonna Miss Me”, famously used in the opening credits of “High Fidelity”, is passionate and loud, and the tracks that follow, like “Roller Coaster” and the amazing “Reverberation” are haunting and sumptuous.

The second half drags slightly, and the reissue version on Spotify lets it down by throwing on some piss-awful jam tracks, but this is still an invigorating, game-changing album from a band who would burn out as fiercely as they arrived. But at least they left this little nugget of pure acid rock behind them, right?