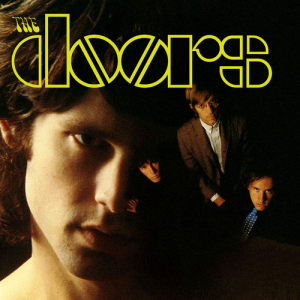 In the annals of rock history, there’s a lot of debate about The Doors. On the one hand, they were visionary and daring – Jim Morrison brought crooning, surrealism and poetry to rock music, Ray Manzarek’s keyboard skills were way ahead of their time and with this album in particular, they created theatrical, bombastic rock music the likes of which had never been seen before (or arguably since). On the other, to quote Philip Seymour Hoffman in ‘Almost Famous’, “Jim Morrison? He’s a drunken buffoon”.

The Doors are one of those bands where you can spend a lot of work trying to separate the wood from the chaff as far as genuine kudos and nostalgic hyperbole goes. It’s been a while since I saw that Oliver Stone movie, but I do recall that it all got a bit messianic.

All of which means that giving this album a fair review is slightly tougher than it looks. Firstly, as far as debut albums go, this is quite something – stick “Riders on the Storm” and “People are Strange” on the end and you’ve basically got a greatest hits compilation. The first track, “Break on Through”, does exactly what it says, it’s a barnstormer that punches its way into your ears, fierce and strong. “Soul Kitchen” brings it down a notch, and with “The Crystal Ship”, Morrison brings that surprising crooning voice to a dreaming psychedelic landscape, and it sounds all the more epic for it.

Even though the next two songs, “Twentieth Century Fox” and Bertolt Brecht’s “Alabama Song” are more traditional blues-rock numbers, and those roots show again on “Back Door Man”, this is an album that stretches convention. The two longest tracks are also the most familiar – “Light my Fire” mixes Manzarek kicking ass on electric organ with sultry lyrics and a classic melody, but it’s “The End” that stays with you. Starting with Morrison’s gentle lyrics about his recent breakup, it descends into an opera of surrealism, breathtaking guitar work from Robby Krieger and THAT Oedipal poem. It’s a stunning piece of work even today, even if it’s hard not to think of “Apocalypse Now” when you hear it.

Whether we remember Morrison now as The Lizard King or just “a drunken buffoon”, on this, their debut album, The Doors were completely on top of their game, and they gave us an album that’s not just exquisite in terms of its musical chops, but operatic in a way that rock had never dared be before.