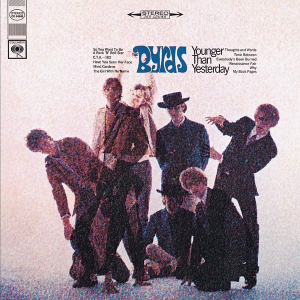 As I chug through this list, I do of course peek forward from time to time at the albums that are coming. There’s a few surprises, a few jaw-dropping omissions, and a few albums that I confess I’m looking forward to with trepidation. But there’s also a few themes that clearly assert themselves – I’m pretty sure that jazz music didn’t stop after “Bitches’ Brew” for instance. But the one that really caught my eye (at least at this point) is that the list manages FIVE Byrds albums. Five.

I mean yeah, great band and everything. Sure, the two I’ve already got to ,”Mr Tambourine Man” and “Fifth Dimension” were both worth their salt, but five? Pink Floyd only get four. Lee Scratch Perry and The Libertines didn’t even get one.

So, starting on this album, I was a bit cynical, or at the very least weary. Surely a Byrds album is a Byrds album, right?

It starts off with the massively catchy “So you want to be a Rock and Roll Star”, a cynical stab at the manufactured band culture of the likes of The Monkees. It’s quite a rocker by McGuinn standards, and it’s got quite a few good covers by bands as diverse as The Patti Smith Group, Eddie Vedder and, um, Roxette.

Yes, you read that last bit right (skip to about four minutes in)…

“Have you seen her face?” captures that ubiquitous Byrds sound, but it’s got a vibrancy which feels new and fresh. “CTA102” though, is where the mischief really gets going, with a surf rock opening about exploring space (a sequel to “Hey Mr Spaceman” perhaps?), getting more surreal and dream-like before it fades out to aliens listening and chatting light years away.

When it gets round to “Time Between”, it starts moving from that familiar psychedelia to country-rock, and that’s a trend that continues with the haunting “Everybody’s been Burned” and “Thoughts and Words”. For me though, the highlight is the beautiful “My Back Pages” with that lovely Dylan lyric “I was so much older then, I’m younger than that now”.

The last few tracks are dwarfed by what went before. “The Girl Who Had No Name” reaches once again towards country-rock, as does closer “Why?”, although that still sounds sweetly acid-influenced.

This is an album from a group that was properly maturing. Once again, they took a Dylan song and made it their own, but this album remains a step forward, full of great tracks, each with their own unique personality and certainly worth a listen.

And there’s two to go as well…