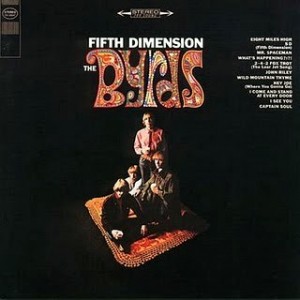 By the time The Byrds got around to creating this album, the fame they’d found with “Mr. Tambourine Man” and their previous album was starting to wane, and although this album contains two of their most famous tracks, it was never a huge seller. Shame really, because while the “Mr Tambourine Man” album set off a new and distinctive sound, it’s on this one where they really start getting confident and creative.

The title track starts things off with a good and proper psychedelic stamp that’s matched closely with “Wild Mountain Thyme”, but the mellow mood is suddenly blindsided with “Mr Spaceman” a song that, as good as it is, will always feel out of place here, with upbeat jangly backing, a fun beat and tongue-in-cheek lyrics. I love it mind.

Maybe the more upbeat feeling carries on with the next few tracks, including “What’s Happening???”, which is musically brilliant as well as dreaming in its sound. That mood carries on later with the magnificent “Eight Miles High”, perhaps The Byrds’ most famous track, featuring some awesome 12-string guitar as well. The mood shakes up again with “Hey Joe”, in a version that couldn’t be more distinct from Hendrix’s cover if it tried. The instrumental “Captain Soul” is pretty soulful for a bunch of white hippy guys and feels ahead of its time, but we’re in familiar territory with “John Riley”, although that starts off with the lyric “Fair young maid, all in her garden…” which made me have to fight the urge to skip forwards. It’s certainly the weakest track on the album, which is a pity because the very experimental last track “2-4-2 Fox Trot (The Lear Jet song)” doesn’t really get the chance to pull it back to greatness.

Still, it’s an impressive album where The Byrds were really not just confident but forming the beginnings of psychedelia. And they weren’t finished yet…