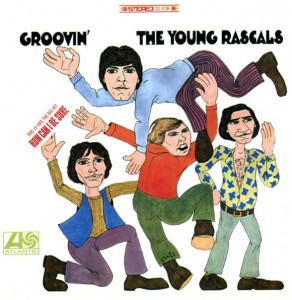 ‘Blue-eyed soul’ is a bit of a derogatory term in these post Michael Bolton days. And to be honest, it’s a little dodgy defining a sub-genre according to the colour of the artists’ skin – it’s a bit like when HMV stuff all the black music in the ‘Urban’ section. Still, right or wrong, us caucasian types have put out the likes of Dusty Springfield, Adele, The Doobie Brothers, Boz Scaggs, Van Morrison, Tower of Power and Amy Winehouse, so maybe there’s something to it.

Take these boys for example. The Rascals (formerly The Young Rascals) were the first rock signing to Atlantic, that incubator of some of the greatest soul music of the era, and it’s pretty clear from their most famous (and wonderful) single “Groovin’” that they were worthy of it.

Never really seen as an album band, they were known for a few classics, not least of which was the quite wonderful eponymous “Groovin’”, a laid back summer soul trip that would make The Drifters pack up and go home in defeat. But that track is just one of a wealth of surprises on here. First track, “A Girl Like You” is a proper familiar Atlantic soul track, but don’t be fooled, the follow-up “Find Somebody” pulls off the clever trick of being a furious garage rock classic that still manages to sit neatly among the other tracks. It’s exciting, it’s acrid and gritty, yet with the soaring chords and clever fades, it’s a real testament to the summer of love sound too.

They mix it up as the album goes on. “I’m so Happy Now” is joyous bubblegum pop, “Sueno” introduces Spanish guitar and a latin beat, “How Can I Be Sure?” channels Bacharach and David and “A Place in the Sun” leans back into a soulful dreamscape that Otis Redding would be chuffed with.

It’s on the last track, “It’s Love” that things get exciting, where you really start to feel the worlds of soul and rock colliding in a wonderful explosion. It’s joyous, uplifting and it kind of kicks ass too. A great way to close off 35 minutes of genre-challenging groovin’ grooviness.