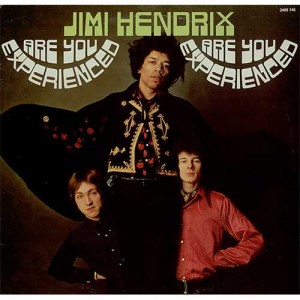 I’m a hundred albums into this project now, ten per cent of the way, and even after all that, I have no idea how to review this album. I mean, it’s Hendrix. Where do I begin?

Looking back 47 years later, the way that Hendrix changed the way guitar music sounds, how this album blew apart the preconceptions about what rock music was, seems ever more visual. The sounds you hear, that wail on “Manic Depression” and “May This Be Love”, sounds almost supernatural even now.

One can only imagine what it did to a world where silly fuckers were still spray-painting “Clapton is God” onto walls.

Of course you all know the first track, the legendary “Purple Haze”, which bursts in with that thunderous riff and Mitch Mitchell’s crisp drums. It sounds as fresh as ever. Q Magazine once called it the greatest guitar track ever, and they’ll get no argument from me. It’s not just a stunning piece of guitar work, but its use of distortion and psychedelic effects is hypnotic and exciting. Leaving aside the oft-cited misreading of the line, when he sings “Excuse me while I kiss the sky”, you believe he could.

“Manic Depression” is a different beast, more anarchic in its sound with a time signature that it’s hard to get a handle on. It’s here where Hendrix really begins to stretch his preternatural guitar skills, and the solo break at 1:15 is incredible, as are the intense drums behind it.

Those initial bars of “Hey Joe” are now so ubiquitous it’s hard to hear them without picturing documentary footage of army helicopters over the Mekong delta or the crowd at Woodstock. In fact, it was the final song played at Woodstock trivia fans. The song, also Jimi’s debut single, is at its heart a simple blues song, and by Hendrix standards it’s actually quite conventional, but once again it’s the extraordinary guitar that makes it stand out.

“Love or Confusion” pushes the envelope again, making you wonder whether this is blues at its heart or something completely new. It’s where the psychedelic feel of the album really hits, mashing blues riffs into overdub guitar and vocal distortion. It’s often thought of as one of the album’s lesser tracks, but I quite admire it.

The pace settles down for the gorgeous “May This Be Love”, with gentle vocals and a laid-back sound. That guitar work sounds even more vivid without the overdubbing and reminds you that Hendrix could do the softer numbers convincingly too.

“I Don’t Live Today” starts off modestly, and tempts you to think it’s among the weaker offerings of the album, but it breaks half way through into a glorious distorted jam of just incredible guitar and fades that bring it back fiercely.

“The Wind Cries Mary” is another laid-back track, and as Hendrix’s third single would have signalled a change of pace that would have tested his career. Influenced by Curtis Mayfield, it’s a blues song in a purer sense, but is all the more tender for it.

We’re back to incendiary drums and herculean riffs with “Fire”. The lyrics are a bit poppy, perhaps even novelty-esque by Hendrix standards, but this song is still a right belter. Mitch Mitchell excels here too, pumping out an insane beat that could be mistaken for modern day drum and bass (if you pardon the heresy). Love that line “Move over Rover and let Jimi take over” for all its coolness, even if it was actually written as a literal reference to a Great Dane.

“Third Stone from the Sun” is where it all gets weird, a real experimental jazz piece that fuses with rock beats and acid sounds, with slowed down spacey dialogue and echoing sound effects to create a haunting dreamscape. It’s quite a spectacular offering. I didn’t even let the fact that the reason I recognised that familiar riff was because it was sampled for Right Said Fred’s “I’m Too Sexy” put me off.

“Foxey Lady” was the original opener on the UK/International edition of “Are You Experienced”, and you can imagine it working as effectively as “Purple Haze” in bringing the album to life with that wailing distorted guitar intro and catchy beat. And no, I’m not going to go without showing you that Wayne’s World clip. It’s hard enough not doing the ears thing when I listen to it.

The album concludes with the title track, which leans on back masking and has a strong resemblance to some of The Beatles’ more experimental stuff. But this is still very much a Hendrix track – when the guitar solo comes in you’re in the presence of a god, and when he asks “Have you ever been experienced? Not necessarily stoned but beautiful?” he’s talking directly to you, with the promise of greater heights to come.

“Are you Experienced” is Hendrix’s most conventional album, but mundane it is not, and the sounds that he reaches on here are mind-blowing even now. A truly awesome debut.