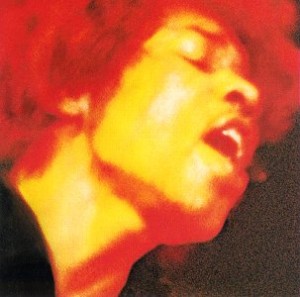 If “Are you Experienced?” was the shining moment of Jimi Hendrix the rock musician, and “Axis: Bold of Love” the zenith of Hendrix the psychedelicist*, then this puppy would surely have to be seen as the culmination of, well, Jimi Hendrix the genre-defying guitar deity. Because this is, as journalist David Stubbs put it, “undoubtedly a rock album, albeit rock on the point of evolving into something else.”

It kicks off with the surprising “And the Gods made love…”, a minute or so of pure distortion. It sounds like electronica, like something totally new – it’s a track you could easily imagine at the kick off of a Leftfield album.

It’s followed fast by “Have you ever been to (Electric Ladyland)?”, which kills the wow factor a bit. I’ve always struggled with this track. I mean it’s ALRIGHT I suppose, but really it’s plain vanilla acid rock that’s not challenging and slightly off-key, and by the time it fades into the blinding “Crosstown Traffic” you’re glad to see the back of it. “Crosstown…” has been described (OK, in the book) as the ‘perfect Hendrix single’ and it’s certainly qualified.

Right, anyway, confession time: I had a grand plan for this month. I was going to keep up to my original (ridiculous) schedule of one album a day. I wouldn’t necessarily do a review every day but I’d get 31 out in May. So far it’s been tough but fun, and it actually seemed possible I’d achieve it. Was actually in with a chance of doing it until ‘Electric Ladyland’ came along, and more specifically, “Voodoo Chile” – there’s just so much to take in, it feels epic. But this was the big hurdle, and sweet Dawkins, what a hurdle.

I played “Voodoo Chile” from beginning to end, over and over again. I played it in the car. I played it at home. I played it in the kitchen when I was trying (and failing) to make sourdough bread. I played it at an irresponsible volume with my 23-month old son in the room, in between his repeated demands for “In the Night Garden”. And I barely got any further into the album because I JUST COULDN’T STOP F-ING PLAYING IT. It’s a gorgeous, majestic, crotch-moisteningly exciting blues masterpiece, with preternatural guitar work, the posturing of Howlin’ Wolf, genre-stretching electric piano and drums to make Keith Moon shit his pants.

What follows calms down slightly. “Little Miss Strange” switches to Noel Redding on the vocal. It sounds very British Invasion-Small-Faces-y, and it’s quite harmless and pleasant. “Long Hot Summer Night” is unremarkable too (by Jimi’s standards at least), although that punching line of “Where are you when it’s a long hot summer?” really works.

Sometimes it’s hard to pick a genre for a man like Hendrix. He straddles the chasm between blues, rock and funk so confidently that you can’t really define him as anything other than ‘Hendrix’. That said, “Come on (let the good times roll)” is a blues track, pure and sim… well not simple actually – this cover of the Earl King track is so layered with insane guitar and drums that once again it’s genre-defying. Just enjoy it.

The Stevie Ray Vaughan cover-of-a-cover version of this one is worth checking out too.

One of the things I’ve been noticing a lot listening to all these sixties albums is how they all seem to love a bit of a play about with stereo effects. It’s not a phenomenon you get these days – stereo is so ubiquitous that it doesn’t catch attention, but when you listen to tracks like “Here, there, and Everywhere” by The Beatles, the effect of two separate tracks joining somewhere around your medulla oblongata is jarring as well as fascinating. “Gypsy Eyes” does the stereo messing brilliantly – the guitar throws itself around the left and right channels almost randomly, and the effect is fascinating. And it’s a great track too, nicely compacted into an eventful 3 minutes and 44 seconds.

“Burning of the Midnight Lamp” rounds off Side 2 nicely. For all the posturing you get from tracks like “Voodoo Chile” and “Foxey Lady” it’s easy to forget that Hendrix was quite the talent for introspective mood pieces like this (see “Manic Depression” for reference). Despite an intro that’s unnervingly reminiscent of the old Thames TV opener, this is a lovely, dreaming and epic song.

Side 3 (or Disc 2, or Track 10, depending on your medium), opens with “Rainy Day, Dream Away”. Remember what I was saying about genres? Here’s some Jimi jazz for you. Maybe a little tongue-in-cheek of course, but still jazzy in all the best ways. At 1:10 he groans into the mike, “Baby I can groove”, and it’s hard to argue with him, and the nursery rhyme-like lyrics just add to the charm.

The follow-up, “1983… A Merman I Should Be” is another 14-minute whopper, and for all the chaos, it’s surprising to me that it’s not seen as a bigger classic than it is. Remember what I was saying about genres? Here’s some Jimi jazz for you. Maybe a little tongue-in-cheek of course, but still jazzy in all the best ways. At 1:10 he groans into the mike “Baby I can groove” and it’s hard to argue with him. And the nursery rhyme-like lyrics just add to the charm.

Is “Still Raining, Still Dreaming” a sequel to Track 10? It ditches the jazz for some R&B theatrics, but the Hammond Organ and exquisite guitar are all there. Once again it’s chaotic, but it’s strangely engrossing.

“House Burning Down” is one of Hendrix’s few forays into proper politicising, sticking the boot into Vietnam and the hippies, but it’s still a blinding bit of guitar rock with a gorgeous intro riff. Oh, and that final 30 seconds is mind-blowing.

Elvis did “Always on My Mind”, Aretha did “Respect”, Soft Cell did “Tainted Love” and Johnny Cash did “Hurt” – some covers not only leave the originals in the dust but make you forget they’re covers in the first place.

It’s fair to say that Jimi’s “All Along the Watchtower” falls into this category, right from those oh so familiar first chords through to its vitriolic finish. Even Dylan joked that “it’s not a wonder to me that Jimi recorded my songs, but rather that he recorded so few of them, because they were all his.”

Completely irrelevant side note: if, like me you’re a shameless Battlestar Galactica fan, then you’ll know that this song, particularly Jimi’s version, plays a big part in the story, so it’s perfectly forgivable to be reminded of Baltar and Six walking through New York when those first bars kick in. And it’s also totally forgivable to geek-spooge slightly when you see this live version of the Bear McCreary cover with Katee Sackhoff on piano.

You’re all going to unfollow this blog now aren’t you? How about this instead? [Hint: PLAY IT LOUD]

“Electric Ladyland” was Hendrix’s last album before his death (there’s been a flood of variable quality posthumous ones since) and the last from The Jimi Hendrix Experience, and it’s a shame because it’s true, this is a genre-bender. As an album it wavers in places. It doesn’t really have any weak points (except perhaps the title track), but its epic heights are spaced out quite comfortably. As Jimi’s last studio album it’s one he can be proud of.

Oh, by the way, you’ll noticed I haven’t mentioned that cover. Well, it’s worth saying that Jimi hated it, and besides, those women are old enough to be your gran. Filthy boy.

* Yes it is a word actually. Shut up.