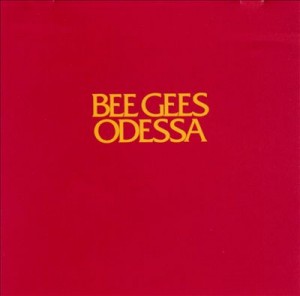 I’ve never liked The Bee Gees. I don’t know why – I don’t like tinsel and I can’t explain that either. The Bee Gees? Why not Boney M or the fucking Goombay Dance Band while we’re at it? Plus, there was something unpleasantly earnest about them that pissed me off too.

So when I first approached this one, to say I was sceptical was understating it. A quick glance at the history of the album shows that it was a troubled production – not only had the band lost their guitarist Vince Melouney before recording started, but the original release came with ornate gold packaging that subsequently caused major allergic reactions. Looking back, Barry Gibb has dismissed it as “a confused work by an exhausted band”, and even its greatest admirers would have to admit that “Odessa” is at least half an hour too long.

Still, it’s got a few surprises. While the opening track is self-absorbed in its attempts at baroque cleverness, as you get further in there’s a disparate selection of treats. “You’ll Never See My Face Again” is a gentle but powerful bit of songwriting, “Marley Purt Drive” is a genuinely funny piss-take of all the Byrds-Crosby-Stills-Nash-Parsons-Creedence country rock that seemed to be en vogue at the time, and “Whisper Whisper” throws in a few funk chords that must have time-travelled back from 1976.

As you get further into the album it continues to throw in hits and misses. “Lamplight” is wonderfully epic, “Give Your Best” sounds like it would be right at home on Sgt. Pepper, and when things get really grandiose on the shocking “Seven Seas Symphony” it’s quite unexpectedly brilliant, and that operatic feel returns on the penultimate track “First of May”.

It doesn’t always work. “Edison” sounds bloody awful (and by the way, Thomas Edison was a dick), and “Melody Fair”, while not devoid of charm, does the old medieval ballad bollocks thing that was weirdly popular in the late sixties, and has some cringe-worthily sexist lyrics. Oh, and there’s that line “You said goodbye, I declared war on Spain” on “Never Say Never Again” that proves they could still manage shit songwriting when they wanted to as well.

There’s so many different directions and styles on this album that it’s not easy to summarise the whole thing, except to say that with a few surgical cuts here and there it could have been a genuine classic, but stands now as a quietly impressive but flawed work from the last band you’d expect, and while it’s a grand monument to the art of disappearing up your own arse, it’s still a good listen.

At least Clive Anderson agrees with me anyway…

They’ll still always be tossers to me.