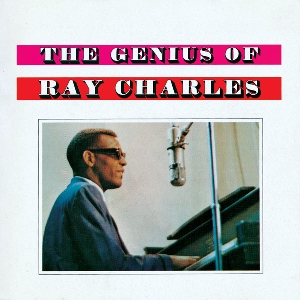 One of the first albums I bought when the iTunes store opened in 2004 and effectively emptied my bank account was “Genius loves Company”, Ray Charles’ swansong collaboration album where he joined with artists like Norah Jones, Van Morrison and, on “Do I ever cross your mind?”, my favourite from the album, Bonnie Raitt.

It was wonderful, rich in sound, and a great end to a long career that crossed so many genres it’s kind of hard to pin him down to just one. But it’s also pretty clear listening to this album, from the start of his career, and seeing it in the context of its time, that what we think of now as soul music wouldn’t have happened without this guy.

From the opening “Let the good times roll” to the unnervingly moving “Come Rain or Come Shine”, this album jumps around, fusing blues, jazz, R&B and good old-fashioned crooning, and it’s a thrilling ride. He was only in his twenties when he put this together, but he sounds accomplished, like a master of his trade, and that it was just the start of greatness to come makes it all the more pleasurable to listen to.