To say that Skip Spence is no exception is probably underselling it. 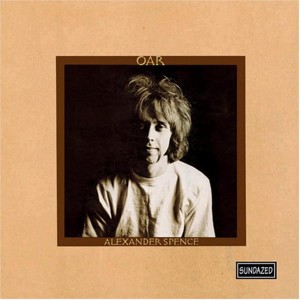 To say that Alexander ‘Skip’ Spence is no exception is probably underselling it. Formerly the head honcho with Moby Grape (and briefly the drummer in Jefferson Airplane), he was right in the mix of the late sixties music scene, but after too much LSD and some harder stuff, his mental state deteriorated to the point where he tried to break into bandmate Don Stevenson’s hotel room with a fire axe, and was committed to Bellevue mental hospital for six months.

“Oar”, recorded right after his release remains Spence’s only solo album, and it’s one that, once you get into it, is quite breathtaking in its levels of pain and despair, although it still manages some surprising lighter moments.

It kicks off with “Little Hands”, surely the most conventional, Moby-Grape-esque point of the album. A great track, for sure, but it gives away little of the hysteria to come.

The next track, “Cripple Creek”, is quite subdued too, with a gentle country twist. There’s a great Beck cover with Wilco, Feist and Jamie Liddel (from Beck’s Record Club experiment) that sounds remarkably different, but it’s still a fine song.

“Diana” though, is where things start getting… whoa.

I’ve got a note I wrote the first time I heard it simply saying “SO MUCH PAIN” and that’s as good a description as any. Muted with a touch of Spanish guitar, it has moments of Spence screaming her name over and over, and you feel like you’re just spiralling down.

Luckily the mood lightens a bit for the rather sweet and mischievous “Margaret Tiger-Rug”, but the gears slip into neutral for the very country “Weighted Down”, a track that you could almost imagine Patsy Cline singing were it not for the heavy introspective vocals.

The fun kicks in again on “War in Peace”, a far more bold piece with some vocal chicanery that has to be heard to be believed, plus a rather funky mid-instrumental appearance of the “Sunshine of Your Love” riff.

The Nashville sound we heard earlier reappears at the beginning of the B-Side with “Broken Heart” but here it’s fractured, Spence’s vocal pained as much as it’s soulful. And the descent comes with the Lennon-esque and dreaming “All Come to Meet Her”.

From that point on it’s anything goes… “Books of Moses” is the most stark and brutal track of the album, complete with a background of stormy skies, as if it wasn’t menacing enough. This is when you know that what is coming through your speakers is the sound of a man on the edge of a spiral of madness. He’s wounded, lost and, to paraphrase, he’s got some splinters in him.

Still, perhaps the real charm of this album is that as far as it descends, it’s always able to pop up for a knowing wink to the camera, as it does on the lighthearted “Dixie Peach Promenade”, complete with some cheeky lyrics.

“I bought me some zen food to learn how to think, but I can’t think of anything more that I’d adore than to see you in the pink”.

Just in case you were misled though, “Lawrence from Euphoria” channels Syd Barrett, and the final track, the floating, ethereal “Grey/Afro” combines some quite epic drumming with sub-audible vocals and swirling bass. It’s the final descent, the point where reality breaks and a psychedelic world of delirium begins. And when it does, you feel like you’ve been with him on the journey there.

“Oar” then, is a quite epic portrait of an artist’s breakdown on vinyl, and as Julian Cope once said of it, “Alexander Spence didn’t so much play music on “Oar” as much as he let the music play him.”

For all its surrealism and psychosis though, Spence remains a master songwriter on here, and there’s some moments of real loveliness.

A quite extraordinary album.