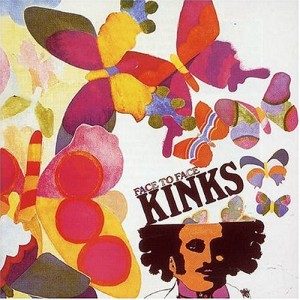 There’s something intrinsically likeable about The Kinks. They managed to be figureheads for the British Invasion, get a few classic proto-metal chords into “You Really Got Me” (and according to Ray Davies, there’s a shout of “Fuck it” hidden somewhere at the end of the second chorus), and not only have they churned out classic after classic (Lola, Waterloo Sunset, Days…) but they captured the British zeitgeist in musical sonnet while Damon Albarn was potty training.

At the heart of all their likability though, has to be Ray Davies’s songwriting – always winking, always evocative. It’s no wonder Pete Townshend said he should be “Britain’s next Poet Laureate”. If you get a chance to listen to his wonderful solo live album, “The Storyteller” by the way, do it.

For “Face to Face” though, the Kinks lovefest hit a bump in the road. Just prior to the main recording sessions, Ray Davies had a nervous breakdown, and there’s a dark edge behind some of the satirical social observations on the album (for me, “Session Man” always feels a little uncalled for). Still, this album was the big landmark for The Kinks moving beyond sixties pop into richer, more serious territory, and notably was the first album written entirely by Ray. It’s not afraid to rock, as can be seen from opener “Party Line” and the Chuck Berry-esque “Holiday in Waikiki”, but it’s creative throughout, and towards the end, it’s got the hypnotic “Waterloo Sunset” which, let’s face it, would redeem a far lesser album than this.

Side note: In a school assembly, I got into a lot of embarrassment when I announced a song as “You really got me by The Kinks”. Still, as I was playing the title character in a Jimmy Saville bio play, upon reflection my Kink-y innuendo was the last thing I should have been concerned about.